How to make identity measurable?

One of today’s hot topics in science and eventually in public discourses is the question of identity, a concept that seems to elude a concrete definition. The main aim of this research is, how to make identity measurable, quantifiable with the methods of discourse analysis and frame-semantics and to theorise the phenomenon identity. The following research uses the concepts and methods of frame-semantics and discourse analysis in order to create a theoretical framework for a computer-assisted analysis based on a corpora of published newspaper material by the German minority in Hungary.


The frame-semantical concept of this research relies heavily on the work of Lawrence Barsalou and his conceptual-frames, since according to the understanding represented in this research, conceptual structures, like adjective-noun syntaxes, pronouns (f.e. the usage of the pronoun ‘we’) can be the marker of group identities within the corpora.

The discourse analytical part uses the critical discourse framework of Siegfried Jäger and his concepts of discourse positions (‘Diskurspositionen’) and discourse events (‘diskursive Ereignisse’) and Dietrich Busse’s discourse semantic archetypes (‘diskurssemantische Grundfiguren’) and the theory of historical semantics (‘Historische Semantik’). The usage of these concepts enable on the one hand the embedding of the historical dimension and relationship of the given minority to its past, the schematisation, the reinterpretation processes of its own past by connecting these concepts with the theory of cultural and communicative memory of Jan Assmann. On the other hand, how these concepts are represented in the discourse by the different participant groups with different views. The theorisation of ‘identity’ uses the border concept of Fredrik Barth that describes how diffuse these borders between in-group and out-group are, and how they are constructed. This part of the research formulates a definition influenced by the dichotomous ‘strong’ and ‘weak’ definition of identity described by Rogers Brubaker and Fredrick Cooper. The identity definition of this research stands for that it is fragmented, is constructed on the border of ‘we’ and ‘they’, is strongly situational and perceives it less as a sameness among group members, but as an inventory of possible identity fragments and has a time-based dimension that can be approached both as intergenerational phänomenon as well as a cultural-historical constructs.

Lastly, based on these theoretical framework, a corpora of the Hungaro-German newspapers will be constructed by the author that will be lemmatised, parsed, tokenized and researched with the NLP tool of the Stanford NLP Group. 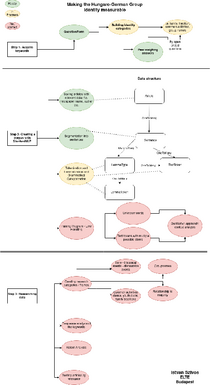